Horatio Spafford’s “It is Well with my Soul” hymn

You are probably a little familiar with the story behind the hymn, It Is Well with My Soul, written by Horatio Spafford, but, then again, “maybe not.

Life is filled with difficulties and even tragedy. This is not heaven! We often have so many questions. “Why?” being one of them. How can we possibly cope? I thank God for His Word.

“Come to me, all you who are weary and burdened, and I will give you rest. Take my yoke upon you and learn from me, for I am gentle and humble in heart, and you will find rest for your souls. For my yoke is easy and my burden is light.”  Matthew 11:28-30

The Spaffords lived in a pleasant home on the north end of Chicago during the late 19th Century, with their four young daughters: Annie, Maggie, Bessie and baby Tanetta. The family was described as ‘deeply religious’, though their religion was ‘a matter of joy and not gloom, as was often the religious teachings of the day’. In fact, Horatio’s convictions were at odds with many, including friend and preacher, D.L. Moody, who prided himself in ‘shaking people over hell to make them good.’ Instead, the girls were taught about a loving Savior and had an amazing grasp of Scripture for their age.

Then, one day, the Spaffords world changed.

On October 8, 1871, the Great Fire, as it was later called, swept through the city of Chicago, leaving 90,000 homeless and killing 250. The Spafford’s were safe and so was their home, but Horatio lost his law office and his real estate investments. Despite this the family got to work helping those that had lost everything.

However, Anna’s health was suffering. It was decided that the Spaffords would take a much-needed break and go to Europe to visit friends. At the last moment an important business deal delayed Horatio’s departure. He would have to join them in a few weeks. He waved good-bye to his family as they slowly disappearing from view on what was considered the foremost pleasure ship of the day, the Ville du Havre.

Then, on November 22, 1873, at two o’clock on a cold, calm night, as the ship crossed the Atlantic, it collided with another ship. The impact was enough to stop the ocean liner, throwing people from their beds. Anna quickly took her girls, dressed only in nightgowns and coats, up to the deck where passengers ran screaming hysterically in every direction. Many pushed and shoved their way onto lifeboats that were firmly stuck to the deck with dried paint. Others jumped overboard with life preservers and seat cushions.

The girls clung to Anna.

The great ship careened to starboard. Little Maggie looked at her mother and said, “God will take care of us.” Then Annie, the oldest, reassured them, “Don’t be afraid. The sea is His and He made it.”’ Within twelve minutes of being struck, the Ville du Havre sank, taking with it 226 passengers, including Anna and Horatio’s four girls who were aged ten, eight, five and two. This happened thirty-nine years before the Titanic sank  in 1912.

Somehow Anna was among the fifty-seven survivors.

She and the others had been picked up by boats sent out by the ship they had hit. Poor Anna. Her little girls were her life and now they were gone. How could she possibly go on without them? She tried throwing herself overboard to be with them but was stopped by other survivors. Grief threatened to swallow her sanity as she and the others were taken to Wales. However, as reality set in she knew her girls were not lost to her, but merely separated for a time. When they arrived in Wales she sent a telegram to her husband.

“Saved Alone. What shall I do?”

Upon receiving the news, Horatio spent the night in deep anguish, searching for an explanation. Was it his sin? Was he being punished? As he searched the Scriptures on his way to New York and its harbor, he chose not to give up his faith, but trust in the goodness and love of Christ. While on the ship that took him across the Atlantic the captain took him aside and informed him, “A careful reckoning has been made and I believe we are now passing the place where the Ville du Havre was wrecked.”

The water was estimated to be three miles deep.

But Horatio did not think of his beautiful little girls in the cold Atlantic Ocean. He saw them in the loving arms of their Savior. His burden of sorrow was lifted. When he went back to his cabin he pulled out a sheet of paper from a Chicago hotel and penned the words that were imprinting themselves upon his heart. 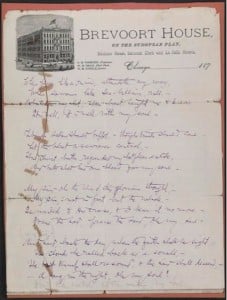 How could this man, who was acquainted with so much sorrow and grief, write the words to what would become such a famous hymn? Unless –

Unless, he understood that the Lord is actually ‘gentle and humble of heart’, longing to carry our burdens for us. With Christ comes an unexplainable comfort and assurance, even in the midst of pain and sorrow, for all those who come to Him.

(I appreciate this part of their story, however, upon digging a little deeper into their lives I found that this was not the end of their tragedies. They returned to Chicago and had three more children (a boy named Horatio and two girls named Bertha and Grace). However, little Horatio died of scarlet fever when he was four and they experienced more business losses. People in their church thought their must be sin in their lives to warrant all these difficulties. So, the Spaffords left the organized church and started their own ‘house church’ with some strange teachings, attracting more than a few followers.

In 1881 the group, headed by the Spafford’s, moved to Jerusalem to await Christ’s second coming. They were called the American Colony by the locals and would create much controversy in the six decades they were there. They would also come to be known for extending care and charity throughout Jerusalem’s tumultuous history. Their residence in Jerusalem became a famous hotel in 1902)

I pray that whatever may come our way, we would hold onto the One who is acquainted with sorrow, is gentle and humble of heart, and longs to carry our burdens.

Do you have a church service, outreach ministry or special event where you are looking for something that will ignite and inspire faith while sharing the gospel? Learn more to see if Acting Up! Drama will be a fit for your ministry.
Learn More